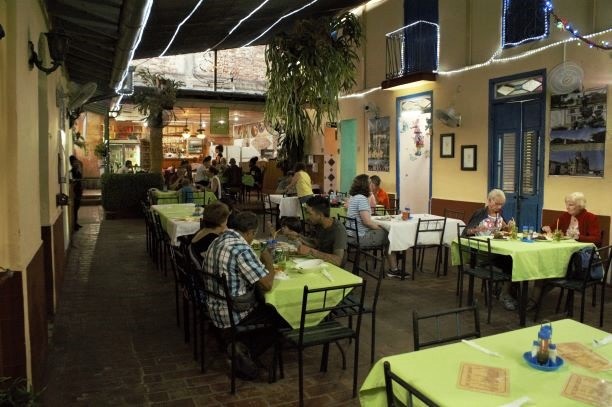 Eating and drinking in Cuba 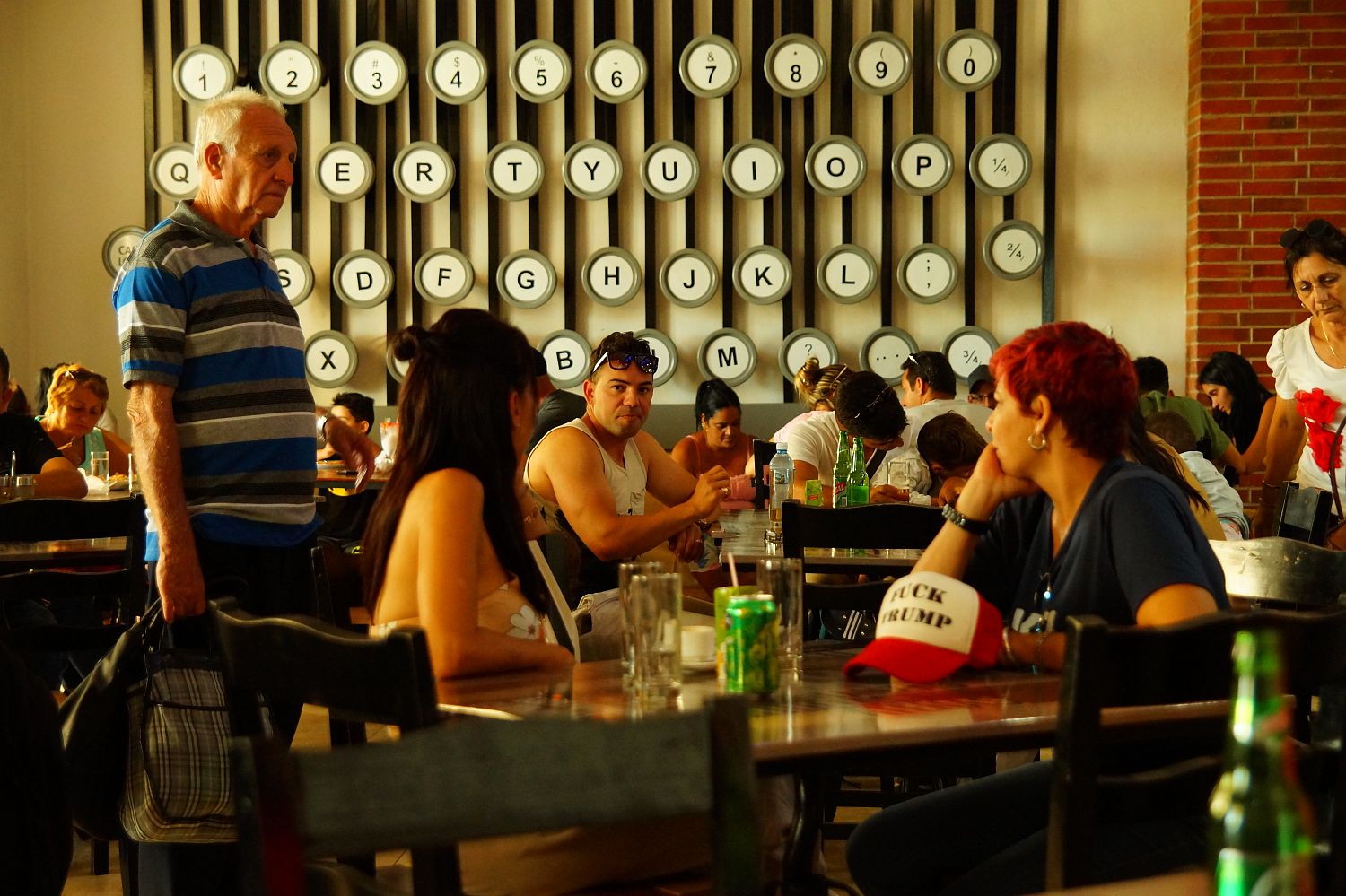 Even as a lover of the country, you have to admit that Cuba is certainly not a place for gourmets. On the Caribbean island, good quality food is not easy to get. Here prevails the fat food because people like to deep-fry. What’s more, a meal without meat is hard to imagine for most Cubans. Vegetables, on the other hand, often have only a decorative character. Furthermore, fruit juices or baked goods are sweetened with a lot of sugar. In this article you can find what offers are available for travelers and what special characteristics you need to consider. In Cuba there are state and private restaurants. With a few exceptions, the state restaurants can be highly criticized. Often there is hardly a choice there, and most of the meals on the menu are generally not available. Likewise, it is better not to comment on service, hygiene and quality. It is usually very easy to recognize them: they have little or no guests. The few clients who visit these state institutions mostly come because of the subsidized prices and not because of the range or the quality of the food. 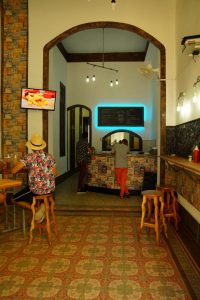 Private restaurants, on the other hand, are often better managed. Their development began after the State initially granted licenses to a few private individuals to serve guests in their private homes.

At the beginning it was mostly a kind of living room - the so-called paladares. These small restaurants were primarily frequented by wealthy foreigners.

After the resignation of Fidel Castro, in the course of the liberalization of the economy, the private operation of snack bars and restaurants was approved nationwide. Since then, quite a few snacks and more or less professional bars have been opened for both foreigners and Cubans. The spectrum of restaurants ranges from the simplest snacks, which were set up in former garages, for example, to professional restaurants with numerous tables and employees. Simple snack bars, where you can eat for a reasonable price, are particularly popular with Cubans. The private owners sell the products from a hut, garage or even directly from the living room. The best-selling meals are pizza, sandwiches, hamburgers, and sometimes pasta. It is common for people to eat while standing. A pizza or a hamburger in such a snack bar usually costs little more than a USD. In addition, a can of coke is often ordered for just under one USD. Backpackers without high requirements can get cheap food in these facilities, but should be careful about their health (food poisoning)

In slightly better cafeterias, you can usually sit down. Besides the typical pizzas and pasta, there are also rice dishes. These meals, known as »comida«, usually include meat, rice and a small side dish. Such a meal with a drink costs around 3 to 6 USD in most cases. 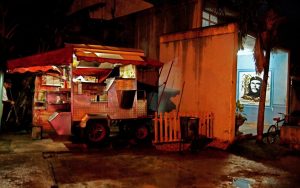 Restaurants have a more extensive offer and usually also a decent service. Many Cubans generally only visit such places on special occasions, so that in many cases foreigners are the main guests. In these restaurants you can sit nicely and receive a decent offer. Often, the menu includes higher-quality dishes such as beef, fish or lobster. There are also starters, desserts, cocktails and coffee. Most vacationers eat in such restaurants. For a meal with drinks, prices are usually in the range of around 10 to 30 USD per person. You can find enough restaurants of this category in the tourist destinations and larger towns.

In tourist destinations such as Vinales, Trinidad and Varadero or in the capital Havana, there are also some upscale restaurants that are almost exclusively frequented by international visitors or wealthy Cubans.

As mentioned, people in Cuba eat very unhealthy food. Cubans are big fans of sweet and fat. Cooking is often done with soybean oil, pork fat or, even worse, the indefinable oil provided by the state food ration cards. There are practically no good fats in Cuban cuisine. 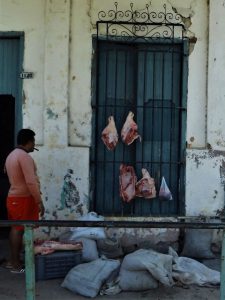 The most important motto is mucha carne! - a lot of meat. For most Cubans, it's hard to understand why you should go without meat when you can afford it. Poultry and pork are typically on the plate. Most of the chicken meat is imported from Brazil or the USA. Pork is often produced in Cuba, usually in home gardens. Beef is considered a luxury product and is subject to a state monopoly. It is mainly reserved for sick and old people and can only be purchased in a few state supermarkets and better restaurants.

One of the traces of the big economic crisis after the collapse of the Soviet Union, is that illegal slaughter of cows is sanctioned with severe prison sentences.

In a country surrounded by sea, one can expect that fish supply is not an issue. Well, that's not exactly the case in Cuba. If the island once had one of the largest fishing fleets in Latin America, today most fish is imported and is therefore - like so much else - in short supply. Basically around 80 percent of all food comes from abroad.

Most Cubans eat on the road in quite simple places called cafeterias. Among the popular cheap dishes are sandwiches, pizza, pasta and rice dishes with meat, mostly pork or chicken. Usually, cheap sweetened fruit juices or soft drinks accompany the food.


Until years ago, all the state-owned snack bars, bars and restaurants were. Since the issuing of licenses for private contacts, quality and quality assurance have improved. In the meantime, a man can find a couple of bars in all of them a few or a few years earlier. Even in objective localities, those who are lucky can find light, light snacks. In the tourist regions, visitors can also have a nice meal in an upscale restaurant.

At the same time, pizzas are offered for cents in the same stalls. Other popular views are spaghetti and hamburgers. For all personal journeys that are not disconnected, travelers should pay attention to the gold-plated special for dishes in which the meat is not well-done or dishes with eggs such as ice cream or mayonnaise. Not seeing that there is a risk and there is a risk of the intestinal margin problems or food poisoning. 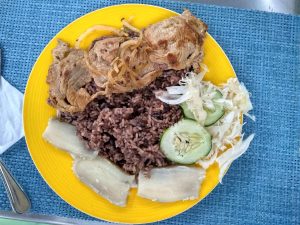 At such a takeaway, meal prices start at just under $ 2. Packaged drinks typically cost just under one US dollar. It is better to stay away from fruit juices (Jugo). These are not only mostly heavily sugared, but also often not compatible with sensitive European stomachs.

Meals (»comida«) are a bit more expensive. These usually consist of rice with beans, meat and a small side dish. The typical dishes are »bistec de cerdo« (pork schnitzel) or »pollo« (chicken), »ropa vijea« (tender pork in sauce) and sometimes »pescado« (fish). Most of the dishes are served with the typical Cuba »congris« (rice with black beans). In better restaurants you can usually find white rice. Side dishes are often white cabbage, some sweet potatoes, a piece of avocado or tomato, and sometimes there are also fried plantains.

In slightly better restaurants, you have to calculate around 5 US dollars per dish. With two people, the bill including drinks is often in the range of 10 to 20 US dollars. 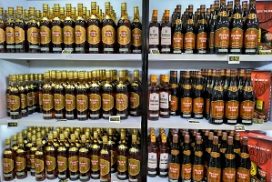 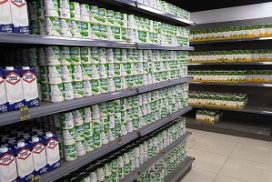 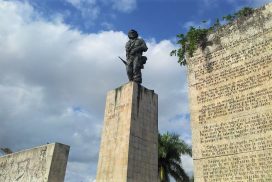 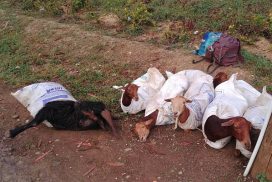